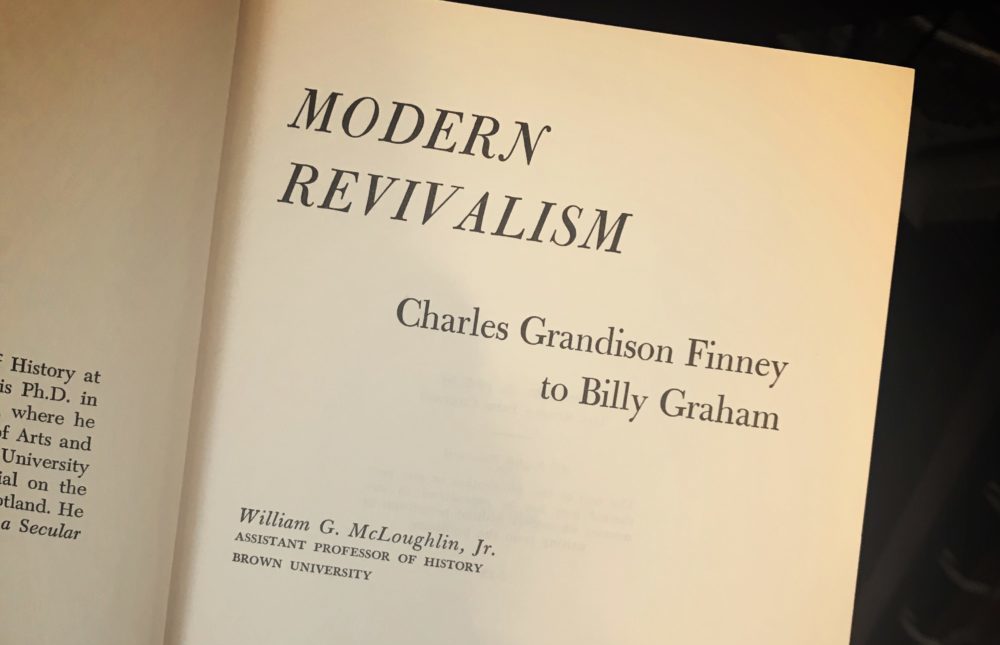 I grew up in a church that was heavily influenced by the American revivalist tradition (as most evangelical churches have been), though I didn’t know that at the time. For me, it was just the way the church was and always had been – the way it was supposed to be.

I imagined Peter having an altar call at the end of his Pentecost sermon, complete with people kneeling up front and ‘Just As I Am’ quietly playing in the background. He’d make his plea, wait for people to start moving forward, and if they failed to do so, he’d tell them all to bow their heads and close their eyes as he tried to goad someone into raising his hand as a sign that he felt conviction and wanted to make a commitment.

I grew up believing that revivals and were as old as the Bible. But then I picked up a history book.

And the more I read, the more I realized how young much of the ‘old-time religion’ really is. These things I grew up with – things like altar calls and revivals – are recent inventions. Most of them can be traced back to the revivalist movement kicked off by Charles Finney around 200 years ago.

In his book, Modern Revivalism: Charles Grandison Finney to Billy Graham, William McLoughlin recounts the history of the revivalist movement by focusing on its biggest stars: Charles Finney, D.L. Moody, Billy Sunday, and Billy Graham. These four men serve as pillars which hold the structure of the book up, but they aren’t the only evangelists discussed. Dozens of other, less well-known evangelists enter the story and shed further light on the way that revivalism developed and evolved.

“But,” someone might object, “what’s the point of reading an old book about an old movement?” After all, most churches today have seemingly given up revivalism. There are no big-time evangelists packing sold-out stadiums today. Few, if any, modern churches are having altar calls or or revivals. So, how relevant could a book like this be for us? After all, it was written in 1959. That was a completely different world.

The Enduring Impact of Revivalism

If William McLoughlin had lived to see today’s religious landscape, I believe he would’ve pointed out the many similarities between the church’s modern methods and the methods of revivalism.

It seems to me, after reading Modern Revivalism, that modern evangelicalism is a direct descendant of the American revivalist tradition. Let me give you a few examples…

Revivalism Changed Why We Preach

For Charles Finney, and most other revivalist preachers, the sermon was not about edifying the body of Christ. Preaching didn’t so much focus on explaining the Scriptures as it did on beating the drum of a single message: “Repent!” According to Finney, “all ministers should be revival ministers and all preaching should be revival preaching.” In other words, “preaching was good if it won souls and bad if it did not” (p.87).

Revivalism Changed How We Preach

And since the goal of preaching shifted from ‘proclaiming God’s word’ to ‘getting people to make a decision’, the method of preaching shifted as well. Finney believed that preaching should get people’s attention and, in order to do that, it needed to be exciting and suit the tastes of the age. This wasn’t so bad at first. After all, I would agree that good preaching needs to engage the whole person. But many of the evangelists described in Modern Revivalism went so far down this rabbit hole that they ended up speaking crudely and doing unseemly things so that people listen and respond.

Revivalism Denied the Importance of the Mind

This lack of deep discipleship led to off of doctrine and theology. After all, who needs theology when you’ve had an experience? And this is exactly what revivalist preachers believed. Sam Jones, the ‘D.L. Moody of the South’ once told a crowd, “Theology is a good thing. It is a good thing to stuff with sawdust, like the skin of a fish, and put in a museum as a relic of antiquity” (p.300). Unfortunately, this led to young believers having incredibly shallow roots – or no roots at all. And what happens when someone with no roots comes up against questions about the truthfulness of Scripture or how a good God could allow so much evil in the world? When our whole faith is built on an ‘experience’, all it takes is another ‘experience’ to knock it down.

And yet, many conservative evangelicals have taken almost the exact position of Jones and others. They’ve downplayed the need for theology, doctrine, and other Christian intellectual pursuits. This is perhaps most easily seen in the platitude, ‘Christianity isn’t a religion, it’s a relationship.’ But the reality is that Christianity is both a religion and a relationship. It includes experiences and deep-thinking. It engages the whole person – body, mind, will, and emotions. Revivalism removed the ‘mind’ from that equation and we’re still paying the price.

But revivalists didn’t just downplay the intellectual aspect of the faith in their preaching. They politicized it. Preaching became more and more focused on dealing with the political issues and moral sins of the day.

I’m not saying that sermons shouldn’t touch on these topics. They should. But, according to McLoughlin, revival preaching “amounted to a kind of campaign oratory for Jehovah’s party” (p.70). Revivalistic preaching became less about the Kingdom of God and more about the kingdom of America. It became more and more focused on calling out the moral issues of the day – alcohol, dancing, card playing, etc. – and less focused on proclaiming, “The Kingdom of God is at hand!”

This is best displayed in the confrontation between Sam Jones, a well-known evangelist, and Sam Jones, the mayor of Toledo, OH. I’m not going to recount the story here but you can probably find a summary somewhere online or you can read it in ‘Modern Revivalism.’ This was the era when it was said, “Christianity and patriotism are synonymous” (p.400). Suffice it to say, Christianity and American politics got married during revivalism. And this is yet another thread that can be traced down through the decades right up to today.

But it’s not just the preaching methods and neglect of the mind that modern evangelicalism has adapted from revivalism. It’s the whole business mindset. As revivalism grew in the nineteenth and twentieth-centuries, it became and bigger business. Mountains of money were spent on worldwide tours and the building of downtown ‘tabernacles.’ To give you an idea of how much money was involved, Billy Sunday’s New York City free-will offering raised $120,490.26 in 1917 (that would be over $2,000,000 today). And that’s just one meeting. So, you can imagine how that kind of money might bring out some…seedier characters.

And that’s exactly what happened. McLoughlin mentions several ‘evangelists’ who took advantage of the opportunities inherent in revivalism to fill their own pockets. Though I do want to say that he’s even-handed in his approach and recognizes that the four big names (Finney, Moody, Sunday, and Graham) did their best to walk the straight-and-narrow when it came to this issue.

Revivalism Changed the Way We Pastor

But as I read about some of the scoundrels, I was reminded of so many modern pick-pocket evangelists. I couldn’t help but think about those crooked televangelists and phony faith-healers who have taken advantage of honest, faith-filled people. It’s a disgrace.

But it’s not just the out-and-out crooks that came to mind. It’s the whole ‘Christianity-as-a-business’ model that grew out of revivalism. Think about it like this, what do most pastors feel compelled to do today? What is their goal? To fill seats. To increase income- err…giving. But is that supposed to be the goal of the pastor? What about actually shepherding the people that God has entrusted to him?

Revivalism (with the help of other cultural changes) has fooled pastors into believing that they are CEOs who are running big businesses. But, to quote John Piper, we are not professionals. We’re pastors. We’re shepherds. And we’ve been called to a greater task than increasing the bottom-line at any cost.

I can already hear the objections. “But look at the impact that those evangelists had on the kingdom! Millions of people were saved because of those revivals! D. L. Moody is my hero!”

But before you object too loudly, you ought to read McLoughlin’s book. He provides the statistics to show that these tremendous ‘revivals’ had little long-term impact on the life of the church. Most of the people who attended the revivals of Finney, Moody, Sunday, and Graham were already believers. Many of them were already committed to a local congregation. And shortly after most of these revivals, church attendance was usually stagnant and sometimes had actually decreased.

Evaluating the Impact of Revivalism

Now, this doesn’t mean that lives weren’t impacted by these men, their preaching, and these revivals. They absolutely were. God did use them. And souls were genuinely saved. But, when looking at our methods, we shouldn’t just ask, “Did God work through this?” We ought to also ask, “Is this the best way? Is this the most effective way? Is this the biblical way?” And I believe that if we ask these questions, we might come to the conclusion that there is a better way to approach our faith.

With all of that said (and I know I’ve said a lot), there is so much more that I’d love to discuss from this book. I mean, I haven’t even touched on the origins of the altar call, the way revivalism shifted the focus away from the congregation and onto the stage, or any number of other conversation starters. This is what makes this such a powerful and important book. It not only sheds light on the past, it helps us understand our present so that we can make wise decisions as we move into the future.

Revivalism has had a lot more bark than bite. And unfortunately, so has much of modern evangelicalism. We know how to make noise, but what’s behind that noise? We can get people down to an altar, but what happens on Monday morning when they’re going down to work? Are we making disciples…or just converts?

These are the questions that ‘Modern Revivalism’ calls us to ask and reflect on – even 60 years after it was first written.

Searching for the Heart of Christianity: A Review of ‘A Change of Heart’ by Thomas Oden