A Review of ‘A Closer Look at God’s Church: A Biblical Evaluation of Key Beliefs of the Church of God’ by Mark Jackson 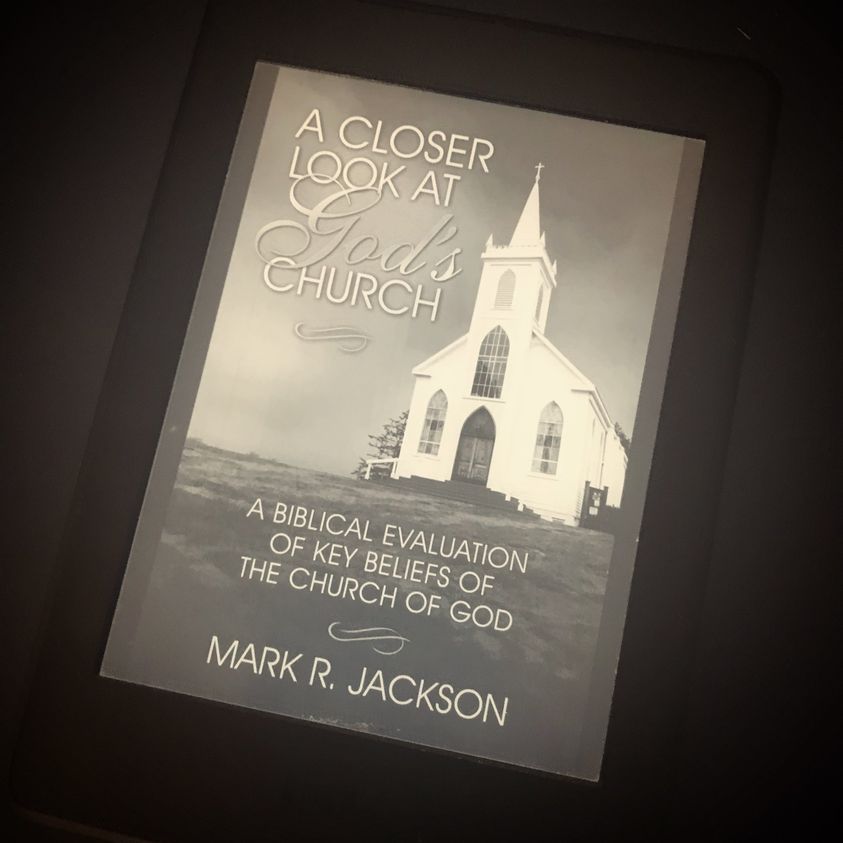 Even with all the warnings, sometimes you judge a book by its cover. I know I did when I first came across Mark Jackson’s ‘A Closer Look at God’s Church.’ It’s not that there was anything wrong with the cover. I just made some assumptions based on the subtitle: “A Biblical evaluation of key beliefs of the Church of God.”

My assumption was that this would be another book like so many others I’d encountered – lionizing our movement’s early reformers, dogmatically clinging to every teaching they’d put forward (whether it had biblical support or not), and calling out all who disagreed as “Babylon” – or worse.

Don’t get me wrong. I love my heritage and appreciate the work of those who’ve gone before. But I would rather do what they did (seek God’s leading with the help of Scripture and the Spirit) than parrot what they said.

I thought this book would be little more than, “Polly want a cracker.” But I was wrong.

Jackson actually does what his subtitle claims: he evaluates the key beliefs of the Church of God with Scripture in hand. And he does a masterful job of it.

The book is broken up into ten chapters, covering ten major doctrinal distinctives of the Church of God Reformation Movement (Anderson, IN), including ‘The Authority of Scripture’, ‘Salvation and Church Membership’, ‘The Assurance of Salvation’, ‘Church Ordinances’, ‘Victory over Sin’, ‘The Work of the Holy Spirit’, ‘Conditional Security’, ‘Divine Healing’, ‘Christian Unity’, and ‘The Kingdom of God.’

Although most of our movement’s core doctrines aren’t unique to our movement, the specific combination of doctrines is. Our understanding of the Church is Baptist, that of salvation is Methodist, and our original reading of Revelation comes from the Adventists. In other words, we’re doctrinal mutts.

Jackson is adept at highlighting the ways that our doctrinal diversity lend our movement strength. But he’s also willing to acknowledge when our early leaders made missteps or went a bit too far. And perhaps best of all, he consistently points toward a moderate, reasonable way forward.

This is a book of practical theology. And like so many great Christian writers of the past, Jackson skillfully guides us from thinking about God to living for God.

Let me give you an example…

When discussing the authority of scripture, Jackson points out that the Bible has always been our movement’s foundation. As he puts it, “Look at anything we believe and ask why we believe it, and our answer will be because Scripture teaches it.” He then goes on to describe how we understand the scripture, its authority, and its inspiration. Throughout his discussion, he draws from the wisdom of Church of God writers as well as the broader Christian tradition. And he includes at least one section in each chapter that is immensely practical (in his chapter on Scripture, he discusses how we should approach and seek to interpret the Bible).

As I said earlier, one of the things I love about this book is the way it’s willing to moderate some of our traditional views. For example, our movement has always been anti-creedal. Generally, all creeds and confessions have been looked upon with suspicion because of their perceived tendency to create divisions within the body of Christ.

Over the past several years, I’ve studied some of the great Christian creeds (particularly, the Apostles’, Nicene, and Athanasian). Unlike many of the Protestant confessions that came after, these early creeds were written to unify Christendom. For the most part, they’re general enough to be received by all believers (no matter what denomination) while retaining the core of what makes the Christian faith Christian. Through this study, I’ve come to believe that these creeds would be helpful for us, even in the Church of God. At the least, they’d contribute to distinguishing between primary and secondary doctrines.

So, I was very pleased to see Jackson write, “We have said that our creed is the whole Bible, not any human interpretation of the Bible. This is why the Church of God has no official, written, authoritative creed that is binding on all its members. I am glad of this, but I think we have gone too far at times in our anti-creedal stance.”

And while Jackson doesn’t believe we should develop a detailed confession that determines who’s in and who’s out (neither do I, by the way). He is willing to see the value in “reciting or affirming a creed like the Apostles’ Creed in corporate worship.”

And it isn’t just in the chapter on Scripture that Jackson does a wonderful job of representing our doctrine and making recommendations toward refinement. It’s in each and every one of these chapters.

This doesn’t mean that I agree 100% with everything he writes or everything he recommends (that’s a standard I’ve never reached with anyone, even my wife). But I do agree 100% with his approach. He has truly evaluated the core doctrines of the Church of God using the Bible, treasured the wheat within, and recommended ways to get beyond the husk.

Now for my one criticism. Even with all of this praise, I see one glaring omission from the book. From our earliest days, the Church of God has been somewhat unique in its willingness to ordain women to ministry. I would consider this one of our “key beliefs.” And because of its less common nature, many people have questions about it. They want to understand how we can recognize female ministers in light of verses like 1 Corinthians 14:34-35 and 1 Timothy 2:11-15. Unfortunately, Jackson doesn’t devote any time to this discussion except for a blink-and-you’ll-miss-it comment about our movement’s willingness to be “flexible in interpreting certain verses of Scripture in a non-literalistic manner when it comes to women in ministry, but not so much when interpreting verses related to footwashing.”

I actually don’t think we’re being “non-literalistic” in this instance. I’d say we’re simply reading the whole canon in context with itself and with the culture/situation of the time. But that’s a discussion for another day. I simply wish Jackson would’ve dealt with this issue in the same way that he dealt with all the others.

But if my biggest complaint is that I wish he would’ve done more of what he did, I’d say that’s practically a compliment.

If you are part of the Church of God (or if you’re just curious about what we believe), you owe it to yourself to read this book and reflect on its wisdom. This is especially the case if you’ve wondered why we believe some of the more unique things we believe – whether our understanding of Christian unity, holiness, or the Kingdom.

Simply put, it’s the most moderate, reasonable, comprehensive look at Church of God beliefs that I’ve ever read.

I sure am thankful I got beyond the cover.

A Review of ‘Mind & Cosmos: Why the Materialist Neo-Darwinian Conception of Nature is Almost Certainly False’