A Review of ‘Where the Conflict Really Lies’ by Alvin Plantinga 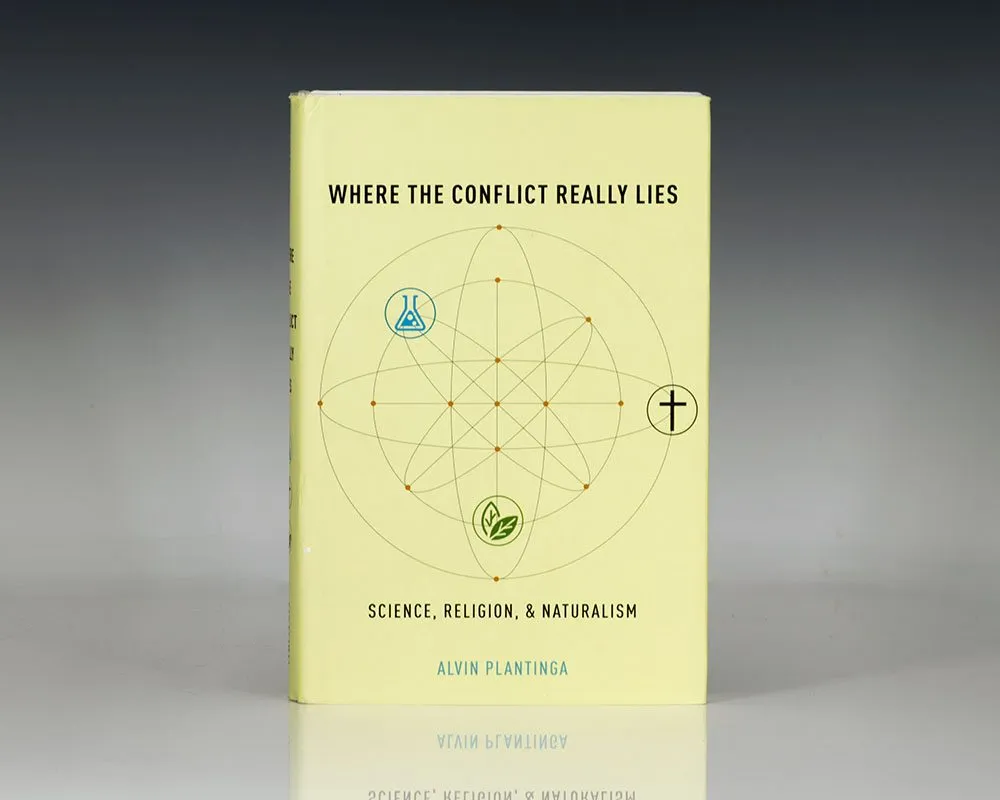 Is there a conflict between religion – particularly Christianity – and science? Many seem to think so. In fact, it’s almost an undeniable fact in the minds of many modern people, especially atheists and agnostics. But just because something is widely believed does not mean that it’s true. After all, people still read horoscopes.

So, what if this common assumption – that science and Christianity are utterly at odds – isn’t true at all? What if, in fact, the Christian worldview and the discoveries of science are in deep agreement? And what if instead, it is the materialist view of things that bumps up against scientific findings?

Plantinga unpacks this idea over the course of this text, examining science, religious belief, naturalism, and the ways in which these things intersect.

First, he examines the commonly held belief that Christianity and the findings of modern science are in disagreement. In particular, he deals with arguments from New Atheists which focus on evolution’s power to explain the diversity and complexity of life without deferring to the power of ‘mind.’ Many of these atheists, like Richard Dawkins, argue that evolution displays the ability of natural processes to create things that appear designed but which are really little more than happy accidents.

Plantinga examines Dawkins’s claim to “show that the entire living world came to be without design” and he argues persuasively that Dawkins is only able to show that “it’s epistemically possible that it’s biologically possible that life came to be without design” (p.25). But possibility is nowhere close to certainty. And, in fact, Plantinga makes a strong case that, though possible, it’s also highly improbable (though he makes that case more robustly in part III of the book).

After looking at Dawkins’s argument, he moves on to Daniel Dennett, another well-known proponent of atheism who argues along similar lines to Dawkins but who also brushes aside any positive argument for God. In Dennett’s mind, is the only genuine means of getting at and since, (as I’ve just mentioned) he shrugs off any logical argument for God, then according to Dennett, there isn’t a God. But Plantinga deftly points out the flaws in Dennett’s position.

In addition to Dawkins’s and Dennett’s arguments, Plantinga also deals with the cases put forward by Philip Kitcher (who argues that the fact of evolution precludes a morally good God) and Paul Draper (who tracks with a more technical version of Dawkins/Dennett’s argument).

In part two, Plantinga honestly faces the challenges that science (and scientific discoveries) poses for Christian belief. He doesn’t shy away from dealing with tough questions, including those about the truthfulness of Scripture and the ability of evolutionary psychology to explain away religious experiences. If you’re a hardline or six-day-creationist, Plantinga will likely make some statements here that cause you discomfort. He’s willing to cede more territory than many apologists I know. But I think that may be his method. There were moments when I wondered whether he was arguing a position that he firmly believed or if he was merely arguing on the atheist’s terms in order to show that – even if what they put forward was true, it wouldn’t necessarily destroy the case for God or Christianity.

The first half of the book concludes with a chapter on ‘defeaters.’ For those who may not be familiar with the terminology, a ‘defeater’ is a belief in one thing that makes belief in another thing impossible. So, for example, imagine that you visit Michigan for the first time and a long-time resident tells you, “There are no poisonous snakes in the state of Michigan.” Since you’re no expert on the fauna of Michigan, it would be reasonable to take him at his word. But, if you left this long-time resident’s house and went on a walk – and while you were walking, were bitten by a Eastern massasauga rattlesnake – and after being bitten, you became faint and passed out – then you would have a ‘defeater’ for the belief that there are no poisonous snakes in Michigan. ‘Defeaters’ make belief in something irrational, even impossible.

Plantinga spends a sizable amount of space dealing with defeaters, their nature, and whether religious knowledge can be defeated. I honestly believe that this is a topic that more apologists should reflect on and incorporate into their understanding of the faith and its defense. Many of the arguments people use to oppose Christian theism are not necessarily defeaters of Christian theism. There may be some pieces of one’s theology/practice that need reworking, but many of these arguments are far less powerful than they might first appear. Reflecting on what makes a genuine defeater would help us recognize this fact.

Chapters seven through nine address the “” that Plantinga sees between the Christian worldview and modern scientific discoveries. In particular, he discusses the fine-tuning of the universe, design arguments, and the way much Christian thought undergirds the whole scientific enterprise (including the regularity of the natural world, the complexity yet perspicuity of mathematics, etc.). Plantinga retreads some of the ground covered by other apologists but he goes at it in greater depth and he doesn’t just make a superficial case. He addresses many of the objections that opponents of Christianity have raised about things like fine-tuning, design, etc. Some of his discussion can get a little heady (especially for those who lack experience in philosophical reading) but it’s largely understandable and overall, I felt like he did a good job of parrying the opponent’s blows. If nothing else, he shows that an equally good argument can be made for design/fine-tuning as the atheists can make against it. Plantinga is no lightweight.

These chapters about “” are powerful reminders that science and religion have not always been at odds. In fact, modern science is the grandchild of Christianity. Many of its presuppositions lie on a very ‘Christian’ foundation, whether modern atheists want to admit it or not.

The book closes with a chapter that focuses on what Plantinga sees as the conflict between naturalism and evolution. His argument can be summed up thusly: if unguided and undirected evolution is true, then our minds have evolved purely for the purpose of survival and not for the purpose of knowing truth. Therefore, we have no reason to trust that what we know is true rather than simply a convenient lie that we believe in order to survive. And if that’s the case, then we can’t really trust anything we believe to be absolutely true – including the belief in evolution itself.

Now, I’m not 100% convinced that this is a defeater for naturalistic evolution. It seems to me that, when faced with this line of reasoning, the atheist will likely point to the way things are and simply shrug his shoulders, “No, evolution didn’t have to lead us to a place where things worked like this – where minds could reason and eyes could see and humans could achieve incredible things – but that is the world that we find ourselves in so this is the world that natural processes created.” In other words, I doubt that many atheists will read Plantinga’s challenge here and have a Damascus road experience – though I would be pleased if they did.

Overall, I think Plantinga makes a compelling case that the supposed war between science and religion isn’t nearly as fierce as it might seem at first glance. On the contrary, you’ll get the sense as you read that a purely naturalistic view of the world has some major challenges of its own (which are seldom aired or discussed). With that said, this is not an easy read. In fact, there are sections of the book that are so technical that the font size is actually reduced in order to let you know, “Warning: You may get lost in here!” If you’re going to profit from this book, you’ll either need a lot of patience, some experience in philosophy/philosophy of science, or (probably) both.

But if you work up the mental fortitude to work through Plantinga’s arguments, you’ll come away with a much more nuanced understanding of the conflict between Christianity and science. Contrary to the prognostications (and hopes) of Dawkins and his ilk, science and its modern discoveries pose no terminal threat to theism or Christianity. In fact, if you’ll look closely, you may realize that there’s actually a deep agreement between them – the kind of deep agreement that you would expect if both of them were true.

And maybe that’s because they are.