A Review of ‘A History of Western Philosophy’ by C. Stephen Evans 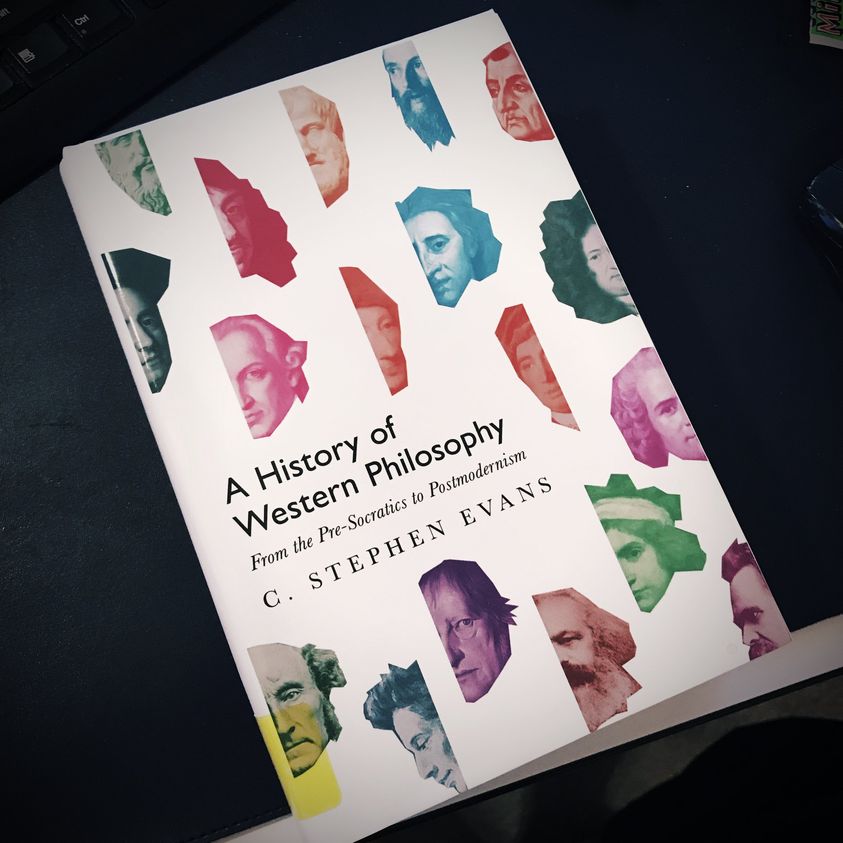 I enrolled in a philosophy class during my freshman year of college. The teacher was everything you’d expect from a college philosophy professor – a button-up shirt with one too many buttons undone, soft curls that fell down to his shoulders, a tendency to answer questions with questions. I dropped it after the first meeting.

For years after that, I assumed that philosophy was for people who didn’t have anything better to do. It all just seemed like so much talk – and so little meaning.

But several years ago, I began revising my perspective on the subject. I think it started when I learned about Dallas Willard and his work in morality and philosophy. As I read what he’d written, I came to see that philosophy doesn’t have to be just talk. In fact, it shouldn’t be. Good philosophy should lead us to good action.

At the same time, I realized that philosophy is all around us. It underlies our religion and politics and culture. It’s the water we swim in – and for most of us, it’s such a part of our lives that we simply fail to notice it or give it any thought.

As C. Stephen Evans writes, “A commitment to a philosophical view (at least on the deepest questions) is not merely assenting to a set of propositions, but a decision as to who I am and who I want to become” (p.580).

Our philosophies inform everything about us.

What could be more important than that?

In his book, ‘A History of Western Philosophy’, Evans offers a 30,000 ft flyover of Western Philosophy Country, from Thales to Nietzsche. In doing so, he provides sketches of the major figures and ideas that have shaped our country, our hemisphere, and the world (for better and worse).

That 30,000 ft view is both this book’s strongest and weakest point. Evans is able to paint a broad picture of how ideas about God, man, the world, perception, and more have changed (often dramatically) over the past 2,500 years. And this is great for anyone who’s unfamiliar with the general contours of Western Philosophy. Honestly, this feels like a book that pretty much anyone could pick up and read. Evans does a great job of defining terms and explaining difficult concepts. In fact, there were several times that he worded things in such a way that the light-bulb came on for me in a way it never had before (I’m looking at you, ontological argument for the existence of God).

Unfortunately, this expansive view also limits the amount of detail Evans can go into for any one author or movement. And since his space is limited, he’s really had to pick and choose who he’s going to focus on. This becomes more and more apparent toward the end of the book. Let me explain what I mean… In chapter seven, ‘Early Christian Thought Through Augustine’, he covers Philo, the New Testament, Tertullian, Justin Martytr, Clement of Alexandria, Origen, the Cappodocian Fathers, and Augustine. By the time he gets to chapter twenty-one, he spends the same number of pages on a single philosopher: Soren Kierkegaard. And rather than write a dedicated chapter to philosophers of the twentieth century, he shrugs and says, “There hasn’t been enough time to assess who will truly be important in the grand scheme of things…”

But we know that certain philosophers of the twentieth century will be influential because they’ve already deeply shaped our world today. And it’s not like this book was published at the turn of the century. It came out in 2018! With this said, he does very faintly sketch out Western Philosophy’s big twentieth-century match-up (Continental vs. Analytic Philosophy), but surely he could’ve included a proper chapter covering some of the big names of the 1900s (like Dewey and Sartre) as he did for other time periods.

The other caveat I should mention is that Evans’ biases are clear. He’s unapologetically Christian. But this doesn’t mean that he’s unfair. Even in the chapter on Marx, Evans offers a fairly evenhanded assessment. He certainly doesn’t agree with most of what Mr. Religion-Is-The-Opium-Of-The-People says. But he does recognize the handful of areas where they do agree. In general, he’s fair with everyone he discusses. And I don’t think we can expect more than that.

So, as I wrap this thing up, I want to offer a couple of thoughts that wormed their way into my mind as I read this book…

First: You and I have been impacted by philosophers more than we can even begin to imagine. As much as we may think it’s boring or stupid or an utter waste of time, we live our whole lives in a graveyard haunted by the ghosts of men like John Stuart Mill, Karl Marx, and David Hume. Since this is the case, maybe we should spend a little time finding out what they said and how their views are still shaping the world we live in.

Second: When we fail to give careful and measured thought to the big questions of life (or the small questions, for that matter), we will fall for anything. I think this is one of the primary reasons that people get carried away by anybody who posts a YouTube video or releases an eBook. And that’s not to say that there aren’t great voices on both platforms. It’s just a matter of recognizing that there’s a lot of garbage too. So, we have the responsibility to sift through it, and the only way that’s going to happen is if we’ve given ourselves to considerable reflection.

Third: In his last chapter, Evans notes that both “the postmodernist who despairs of objective truth and the modern philosophers who aspired to a method that would give us objective certainty about that truth are much closer to each other than is immediately obvious. Both of them accept the following hypothetical proposition: ‘If there is objective truth, then there must be a method that will guarantee that we have access to that truth'” (p. 584). Unfortunately, neither group of people recognizes a third option…

What if there is objective truth but there’s no ‘method’ to access it all on our own? What if, as Christianity has traditionally taught, truth requires a revelation from God? And what if that truth has already been revealed? Revealed in a person… a person named Jesus of Nazareth?

If that’s the case, then much of Western Philosophy (especially since the Enlightenment) has been a chasing after the wind… attempting to build a tower to the heavens, only to realize you can barely get past the first floor.

There’s so much more I could discuss about this book. But, to paraphrase the author of Hebrews, “What more shall I say? For time will fail me if I tell of Aquinas, Locke, Reid, Rousseau, Kant, and Hegel…” So instead, I’ll just recommend that you check it out for yourself. If you’ve always wanted to know how the voices of men and women long dead are still speaking in our state houses, universities, churches, and YouTube videos, you could do a lot worse than C. Stephen Evans’ ‘A History of Western Philosophy.’