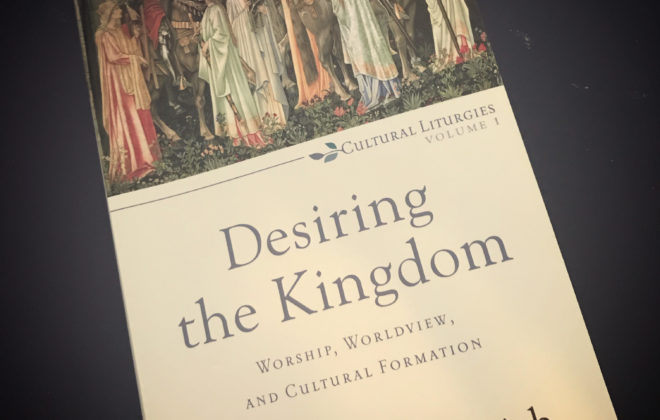 Warning: this is going to be a long discussion/review of Desiring the Kingdom by James Smith. I apologize in advance for venturing a bit into the weeds… it just offers a lot to chew on.

According to ‘Desiring the Kingdom’, the first book in James K. A. Smith’s ‘Cultural Liturgies’ series, his purpose in writing was “to communicate…a vision of what authentic, integral Christian learning looks like, emphasizing how learning is connected to worship, and how, together, these constitute practices of formation and discipleship” (p.11). Man, that’s a mouthful.

And so are the rest of the books. They are a mouthful of philosophy, science, theology, and pop-culture, mixed together to produce one of the most thought-provoking works on worship and discipleship I’ve ever read.

This was not easy to read or digest. On more than one occasion, I had to set the book down and process everything.

“What does it mean for me?“

“What does it mean for the local church?”

“How can we incorporate this into the way we live and worship?”

What we really need isn’t a new thought… it’s a new love. And in these pages, Smith discusses what it takes to cultivate that new love.

In the introduction, Smith takes the reader on “a tour of one of the most religious sites” in modern America: The shopping mall.

Now, you may not think of the shopping mall (or Amazon.com) as a religious site. But that’s probably because you’ve grown up – like me – in a culture where religion is strictly walled-off from the rest of life. For us, religious things are the things we do during Sunday morning worship… or at fellowship dinners… or during Bible studies.

But for most people throughout history and the world, all of life is shot through with religion (see Romans 14 and the connection between religion and eating certain kinds of meat if you’re unconvinced). And even though we’ve closed our eyes to it… it’s still there. Just under the surface.

Why does Smith take this peculiar approach? In his words, “the description is meant to shift our attention and perspective in order for us to recognize the charged, religious nature of cultural institutions that we all tend to inhabit as if they were neutral sites” (p.23).

Smith believes that many of the most mundane institutions of modern American life – from baseball games to universities – are actually “liturgical” in nature. Their rituals are shaping us. They’re teaching us how and what to love.

They’re making us into their image.

In the first, he argues that humans are – at their core – loving beings. Rather than logical Vulcans, driven by their intellect and reasoning, humans act in ways that propel them toward the thing they love the most. “This sort of ultimate love could also be described as that to which we ultimately pledge allegiance; or, to evoke language that is both religious and ancient, our ultimate love is what we worship” (p.51).

According to Smith, our community’s practices show us what to love and build habits within us that draw us toward that love. So, going to the mall isn’t just a way for us to get stuff. It’s a way for “stuff” to get in us. And it happens without us even realizing it.

Learning from the Shopping Mall’s Catechism

The mall (and the marketing surrounding it) teaches us…

Interestingly, our culture doesn’t have to send us through catechism to indoctrinate us into the religion of consumerism. It simply surrounds us with advertisements, entertainment, and all the consumable stuff we could ever want (as long as we’re willing to pay the price).

So, What Does It All Mean?

Now, at this point, I began wondering… “So, what are you expecting, James Smith? Do we just quit going to the mall or logging on to Amazon.com?”

I think most of us realize the dangers of overvaluing ‘stuff’ and undervaluing people… but we still have to have ‘stuff’ to survive. Just try to go a week without toilet paper.

I think there’s a way we can apply some of these thoughts to our lives without legalistically vowing “no more trips to the mall.” For example…

That last question consumes the second half of Smith’s book. He argues that we need to take full advantage of our corporate worship so they shape us in a counter-cultural way.

A Closer Look at Christian Worship

As he puts it, “Before Christians had systematic theologies and worldviews, they were singing hymns and psalms, saying prayers, celebrating the Eucharist, sharing their property, and becoming a people marked by a desire for God’s coming kingdom – a desire that constituted them as a peculiar people in the present.”

From that vantage point, Smith surveys how Christian worship should shape us in ways that go against the cultural grain…

So much of what Smith talks about here is foreign to me. I grew up in (and have always attended) worship services shaped by 19th-century Revivalism. And though that’s included churches with ‘contemporary’ as well as ‘traditional’ worship styles, the basic liturgy is the same…

Moving Beyond this Review of Desiring the Kingdom

It’s obvious that Smith has given a great deal of thought to these elements of Christian worship. Have I done the same? Have I asked what each element of worship is teaching? How it’s shaping us?

I don’t think it’s necessary to adopt everything Smith says here. But I do think that Christian leaders should think a little more deeply about what they’re doing and why. They should continually ask, “How is this forming us?”

And that’s the big question I’m left with after reading ‘Desiring the Kingdom’. How are the cultural institutions around me – from seminary to social media – forming me? How is Christian worship? And how can we take advantage of the latter to resist the former?

There’s so much more I could say. Like I mentioned earlier, this is the kind of book that you need a friend and a cup of coffee to fully digest. But at least this gives you an idea of what Smith argues here… and hopefully, it’s enough to give you something to reflect on even if you can’t read the book.

I’d love to hear any knee-jerk reactions or other thoughts. Just leave a comment below…

Previous: The Power of Snowball Reading: An Effective Study Method