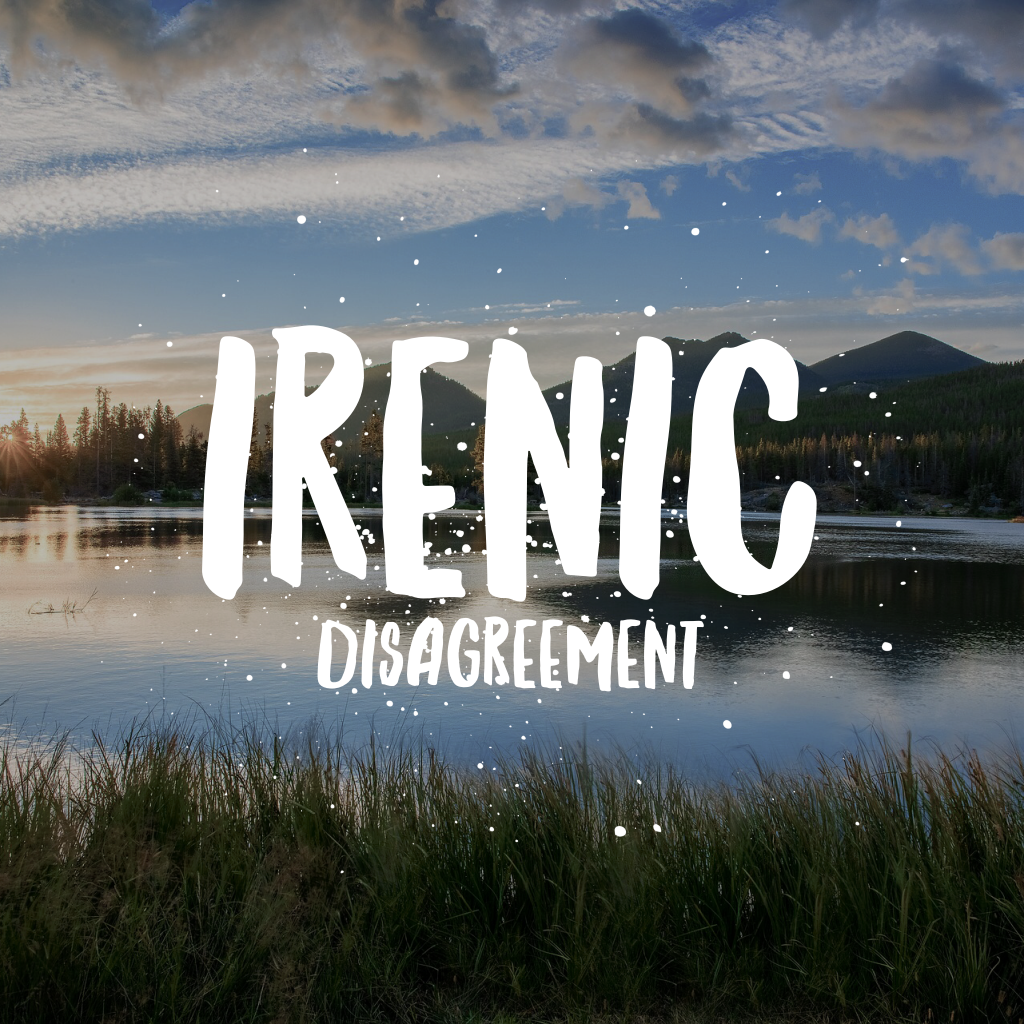 As I was reading The Mosaic of Christian Belief by Roger Olson, I came across a quote that I think is worth repeating. While discussing the diversity in Christian thought through the ages, Olson encourages us to seek “an irenic approach to expounding Christian beliefs” which he defines as “one that attempts always to understand opposing viewpoints before disagreeing, and when it is necessary to disagree does so respectfully and in love.”

What does the Church need today? Irenic disagreement.

The Need for Irenic Disagreement

Now, you may wonder what this means. The English word ‘‘ comes from Εἰρήνη (Eirene), the New Testament word for ‘peace.’

The world doesn’t know how to practice irenic disagreement. That’s why, every time you turn on the television or open a newspaper, you hear little more than insults, straw-men, and hyperbole.

“What’s that? disagree on the issue of gay marriage? Well then, it can’t be that we just have two different opinions on a controversial topic. One of us must be a hateful, bigoted homophobe while the other can’t help but be a left-wing, communist pervert.”

But what happens when we demean our opponents through insults and name-calling? We strip them of their status as men and women who have been made in the image of God. It’s a means of dehumanizing. And it’s the only way that the World knows how to disagree.

Why Is It So Hard To Disagree Well?

We label our enemies so that it’s easier to take them out. In his book, ‘On Killing’, Lt. Col. Dave Grossman writes, “It is so much easier to kill someone if they look distinctly different from you. If your propaganda machine can convince your soldiers that their opponents are not really human but are ‘inferior forms of life,’ then their natural resistance to killing their own species will be reduced. Often the enemy’s humanity is denied by referring to him as a ‘gook’, ‘Kraut’, or ‘Nip.'”

Though Facebook debates and church arguments (usually) don’t end with a body count, the spirit behind them is the same as that which drives us to dehumanize our enemies in war. In fact, many of the denominations that are in existence today aren’t named what they are because the people holding those beliefs chose that name. They were mocked with those names by people who hated them.

A History of Name-Calling

Martin Luther and his followers wanted to be known as Christians or Evangelicals (‘Good News People’). It was the Lutherans’ opponents that derogatorily nicknamed them Lutherans – they weren’t real Christians after all. ‘They were followers of Luther.’ The same thing could be said of the Calvinists, the Methodists, the Baptists, and others.

We must work to understand opposing viewpoints before we disagree or articulate our disagreement. I’ve heard far too many Christians lambast doctrines without ever really understanding what the doctrine teaches. I’ve seen others argue over theology only to realize that, when it comes right down to it, they’re saying the exact same thing in two different ways.

Let me give you an example. Growing up, I heard that Catholics teach that they should pray to and even worship the saints. For years I never questioned this and just assumed it was true. But later I actually looked into the practice and found out that Catholics do not believe what I thought they believe. In Catholic theology (and in much evangelical theology), when a person dies, he doesn’t really cease to exist – he still lives spiritually, only now in the presence of God. For a Catholic to ask Mary or one of the saints to intercede for them is, in their mind, no different from them asking someone who’s still alive on earth to pray for them. It’s like a heavenly prayer-chain. Catholics don’t believe the saint answers their prayers; they believe the saints pray for them.

Now, before you get your pitchforks and torches, I’m not saying that I believe in the intercession of the saints. But what I am saying is, it’s a whole lot easier to dismiss and mock the idea that Catholics worship saints than the reality. And irenic disagreement is rooted in understanding before disagreeing.

The fact is, there are real disagreements between Arminians, Calvinists, Wesleyans, and the rest. But before we get our arguments locked and loaded, we better understand what we’re fighting against or we may end up gunning down our brothers.

So how do we handle genuine disagreement? Do we just live and let live? Do we become relativists and shout “Judge not!” at anyone who says there an absolute right and an absolute wrong? No. We disagree. We use the scripture to support our positions but we always do so in love and with respect, acknowledging the image of God in every human being.

Let Every Disagreement Be Had In Love

We must learn to love.

…To love ourselves enough to be humble and recognize that we aren’t always right. And to remain open to the leading of the Holy Spirit and the power of God’s Word to shape our lives and thinking.

…To love others enough to share the truth with them but also to realize that some areas are more important than others. I may think the idea of a millennial reign of Jesus on earth is wrong but it’s not going to send anyone to hell. On the other hand, if someone claims to be Christian but denies the divinity of Christ or the atonement? There is a serious problem. We must also love others enough to understand them before we disagree with them. We ought to extend the same courtesy to other believers that we want for ourselves.

…To love God enough to always submit to him and his authority. We need to learn to love him enough to value the unity of his Church like he does. And sometimes that unity is best shown by shutting up.

Irenic disagreement is probably best summed up in the famous motto, coined by the Lutheran theologian Rupertus Meldenius, “In Essentials Unity, In Non-Essentials Liberty, In All Things Charity.”

May we all disagree in peace.

Family Devotions: 5 Pieces to the Puzzle