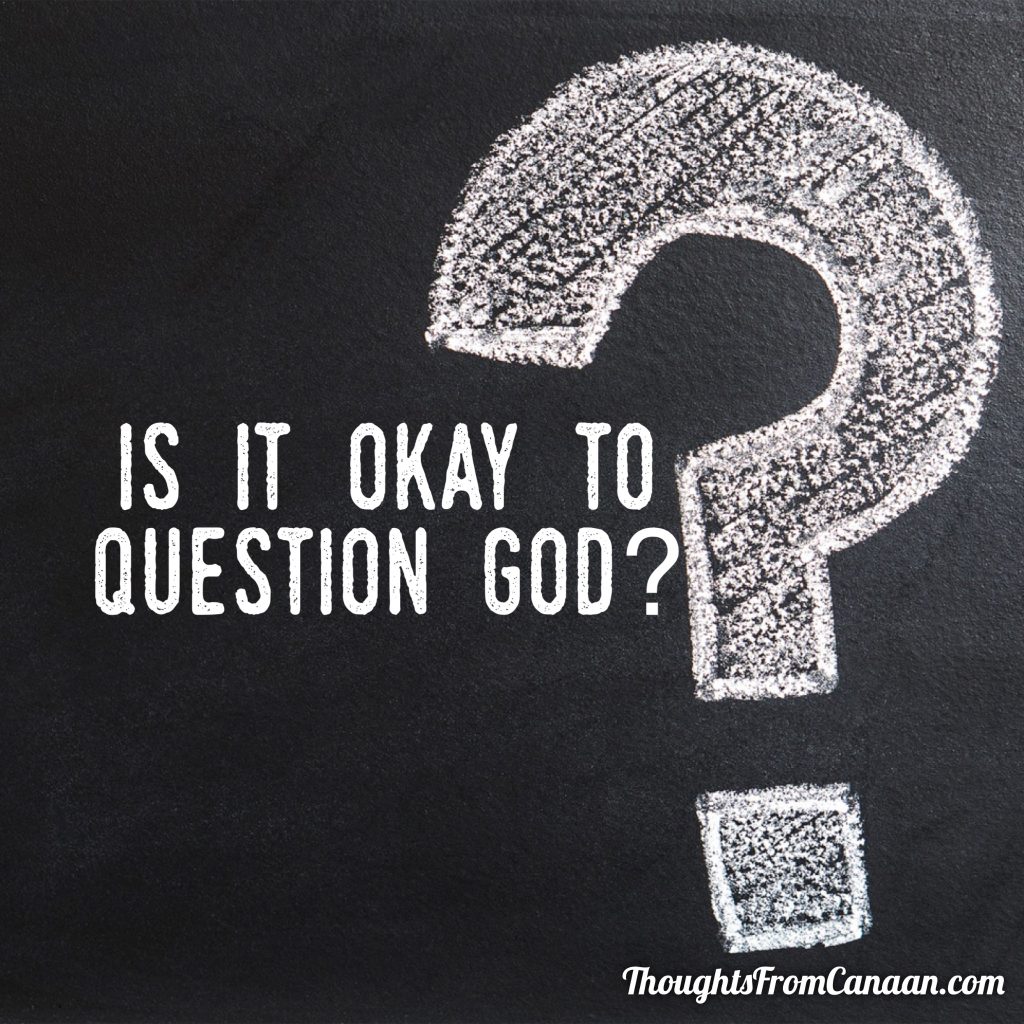 The doctor averts his eyes and quietly says, “It’s cancer”. The phone rings and a voice whispers, “He’s gone”. That dark cloud hangs over your head, crowding out all of life’s hopes. As we face death, disease, and depression, one thought seems to return again and again: Is it okay to question God?

Are ‘good’ Christians always quiet and submissive? Should we just grin and bear it – all of the pain and suffering and hurt? Is there ever a time when it’s right to ask God, “What were you thinking?”

Some Christians would probably consider questions like this blasphemous. “How dare you question God,” they might say. “Don’t you know that Paul said, ‘O man, who answers back to God?'”

And though I’d agree that we can question God in a sinful way – I’d also argue that questioning God is not innately wrong. There’s a time and place – and approach – that’s right.

Have we forgotten how to weep?

Before we can approach the question of ‘Is it okay to question God?’, it might make more sense to start at a more basic level. After all, our questioning seldom comes out of intellectual curiosity. It usually flows out as an emotional response. Tragedy strikes, we’re caught off guard, and then what? Do we cry? Do we ‘stay strong’? How do we respond?

We’ve forgotten how to lament. In fact, most of us probably don’t even know what ‘lament’ means. Part of this is because we live in a culture that avoids pain and sadness at every cost. We push anything that reminds us of mortality (especially our own) and loss to the peripher of life so we can surround ourselves with happy things and happy thoughts. And when we come into contact with someone who is walking through a season of grief, we’re uncomfortable. We fumble for the right words because we want to say something that will restore their happiness.

God created us to feel

Thankfully, the Scriptures are not afraid of tears. When Joseph went missing, his father Jacob “mourned for his son many days” (Genesis 37:34). And when Jacob himself died, his sons “lamented there with a very great and sorrowful lamentation; and [Joseph] observed seven days mourning for his father” (Genesis 50:10). If we continue reading, we’ll see that even the greatest of warriors – King David himself – mourned and wept. And this tradition of lamentation doesn’t end with the Old Testament.

Though we often think of Jesus as stoic and above such things, even Jesus wept (see John 11:35).

And though we know we’re saved and have eternal life – we can still find ourselves wanting to weep and lament and even question God. So before we go any further, we ought to make sure we acknowledge this: Feelings of sorrow and even anger are natural when we walk through the valley of the shadow of death. God knows this. He knows the brokenness of this world better than anyone. And it breaks his heart even more than it does ours.

In fact, I believe that one of the reasons we feel sorrow is because God does. Death and sickness are enemies that were not part of God’s original intention for humankind. They are intruders. And every death – every disease – is a reminder that creation is broken.

God didn’t create us to be unfeeling robots who process everything logically.

Knowing this logically doesn’t make the pain go away.

So what do we do when we know all of the Bible verses and pat answers but it still hurts to get out of bed in the morning? Is it okay to question God?

Any time someone asks me this question, I point them to two places: the book of Job and the Psalms.

Job is probably best known for his “patience.” Though if you read the book, you’ll realize that he doesn’t sit by quietly and submissive. He’s just lost his children, his wealth, and his own health. His wife has left him. And the only thing he has for comfort is a broken pot to scrape the boils covering his body.

And sure, he initially asks his wife, “Shall we indeed accept good from God and not accept adversity?” But it isn’t long before his quiet reservation turns into something else. Listen to the first part of his lament:

Let the day perish on which I was to be born,
And the night which said, ‘A boy is conceived.’
May that day be darkness;
Let not God above care for it,
Nor light shine on it.

Job is wishing he would never have been born. And just in case – because of the poetic language – you doubt this, he goes on to say it even more explicitly: “Why did I not die at birth, Come forth from the womb and expire?” (Job 3:11). And Job doesn’t just wish he were dead. He says things about God that would make a lot of religious folks blush:

[God] will not allow me to get my breath,
But saturates me with bitterness. – Job 9:18

From the city men groan,
And the souls of the wounded cry out;
Yet God does not pay attention to folly. – Job 24:12

As God lives, who has taken away my right,
And the Almighty, who has embittered my soul,
For as long as life is in me,
And the breath of God is in my nostrils,
My lips certainly will not speak unjustly,
Nor will my tongue mutter deceit. – Job 27:2-4

There can be no doubt. Job questioned God.

Questioning God in the Psalms

Like the book of Job, the Psalms don’t sugarcoat things.

Consider Psalm 88 which begins with these lines: “O Lord, the God of my salvation, I have cried out by day and in the night before you…I have become like a man without strength, forsaken among the dead, like the slain who lie in the grave, whom you remember no more…” (Psalm 88:1,4-5). And as he continues, the Psalmist doesn’t let up.

But I, O LORD, have cried out to You for help,
And in the morning my prayer comes before You.
O LORD, why do You reject my soul?
Why do You hide Your face from me?

You have removed lover and friend far from me;
My acquaintances are in darkness.

The Psalmist here doesn’t take everything lying down. He cries out in anguish and wants to know where God has gone. He questions God.

And this isn’t the only Psalm where we find this. I could give dozens of other examples. But rather than listing all of the lament psalms (there are close to 60), I’ll simply quote Psalm 142:2, “I pour out my complaint before Him; I declare my trouble before Him.” God is willing to hear our complaint. His ear is open to our troubles.

He does not expect us to quietly go through life without a word. Even Jesus cried out, “Father, if You are willing, remove this cup from Me” (Luke 22:42).

So, questioning God isn’t necessarily wrong. But does that mean it’s always right? How can we question God in a way that will draw us to him rather than push him away?

When we’re overwhelmed with pain, it’s only natural for us to cry out to God – perhaps even in anger. We’ve seen this in both the Psalms and Job. They didn’t understand why God was acting (or not acting) the way he was and they expressed themselves. But they didn’t stop there. They stayed engaged with God. They kept talking to him. And they never got to a place where they were merely speaking ‘at’ God.

Usually, when the Psalmist came questioning God, he continued asking God questions until he finally reached a place of peace.

And Job, though he probably crossed the line at times, never rejected God. He kept on until God finally showed up, put him in his place, and brought him to a place of reservation.

Neither the Psalmist nor Job ever got answers. They got something far better: God’s presence.

Seeking God’s Presence in the Questions

So here’s what we need to understand about questioning God. It’s okay to express what we’re feeling inside. David said of God, “You understand my thought from afar” (Psalm 139:2). God knows the questions you have. He already knows if you’re sad or angry or starting to feel bitter. Expressing those feelings in prayer doesn’t make them worse. On the contrary, it can help us work through them.

I’ve told many hurting people before, I’d rather you yell at God than ignore him. At least when you’re yelling, you’re still acknowledging that he’s there and listening. But when you start to ignore him, that is a path that leads quickly to unbelief and pride.

There will be things that happen to us that we’ll never understand. And no one – no matter how educated or experienced – will be able to explain them. That’s one of the things about living in a broken world.

And even if we ask God the question every day until we die, he may not answer it with words. But if we’ll persevere – and pursue him through our questions – we will get his presence.

And his presence is far better than any answer.

So is it okay to question God? Yes. Ask your questions. Express yourself. Tell him that you don’t understand.

And keep telling him until he wraps his arms around you and whispers, “Though I may not answer all of your questions, ‘I will never leave you nor forsake you'” (Hebrews 13:5).

Family Devotions: 5 Pieces to the Puzzle