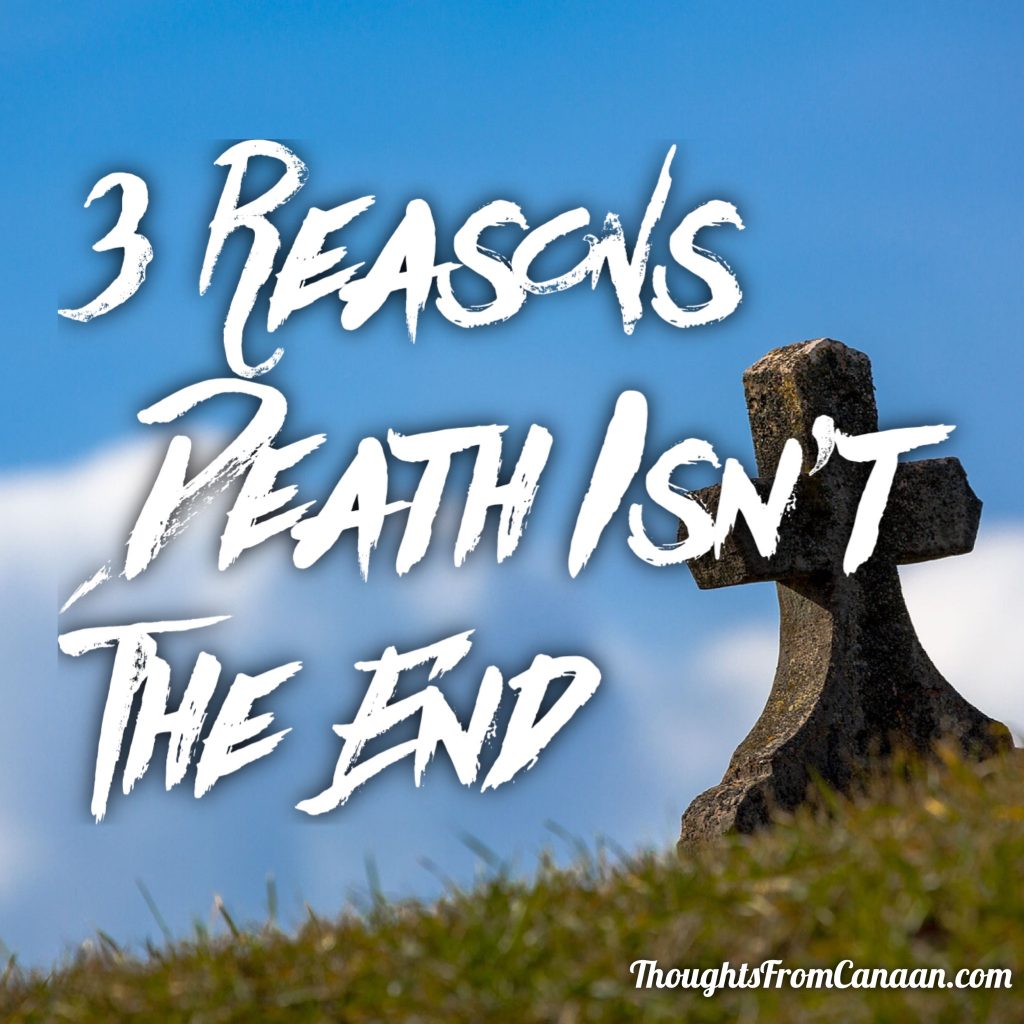 Death Is No Friend

“Is death the end?” It’s a perennial question for us as human beings.

Is there anything more frightening than death? Is there any more pervasive fear? Any foe more common to humanity?

Throughout Scripture, we’re reminded that death is no friend. It’s an interloper. An enemy.

The book of Genesis describes the way death weaseled its way into the world through sin (see Genesis 3 and Romans 5). So it wasn’t part of God’s original creation. It wasn’t his intention for men and women to get sick – or old – and die. We were meant to live forever (I think we intuitively know this, whether Christian or not).

This problem of death crops up again and again throughout the Bible. Job struggled with it. So did the Psalmists. Solomon recognized the vanity of life if death is the end.

Death touches nearly every chapter of the Bible. And yet, Scripture’s final portrait is not one of despair.

Even in the Old Testament, there are glimmers of hope – of a life beyond death’s door.

After his son died, King David declared, “I will go to him, but he will not return to me” (2 Samuel 12:23). Likewise, the prophet Daniel spoke of a time when “many of those who sleep in the dust of the ground will awake, these to everlasting life, but the others to disgrace and everlasting contempt” (Daniel 12:2).

And the New Testament paints an even more vivid picture of eternal life. After her brother Lazarus died, Jesus told Martha, “I am the resurrection and the life; he who believes in Me will live even if he dies, and everyone who lives and believes in Me will never die. Do you believe this?” (John 11:25-26). Paul reminded the Roman Christians that even death couldn’t separate them from God’s love. And the book of Revelation describes death itself being cast into the lake of fire.

And yet, for many Christians, fears persist. We wonder, “But what if I’m wrong? What if death is the end? What if – after my heart quits beating – it’s all over?”

We must take some things on faith. And a belief in life after death does require faith. But, in their book Beyond Death: Exploring the Evidence for Immortality, Gary Habermas and J.P. Moreland discuss three lines of evidence that point toward life beyond the grave. Though they may not prove anything scientifically, taken together they serve as powerful evidence that life doesn’t end when our hearts stop beating.

We Are More Than Bodies

Are We Nothing More Than Brains?

There’s a pervasive philosophy in our world that says, “If you can’t see it, measure it, or test it, then it isn’t real.” And because of this, many people have a hard time believing in the supernatural. They doubt whether we are anything more than our bodies and brains. I think this is especially the case since we’ve come to better understand the brain. We know that chemical imbalances can cause all sorts of psychological issues. So – we’re led to believe – that’s all we are: chemicals and electrical impulses.

But are we really?

If we are our brains, then why do our brains change with the thoughts we think?

And if we are purely physical beings, then we ought to be able to completely control a person by stimulating the proper area of the brain. And it is true that certain experiments have shown that people’s bodies can be controlled by stimulating certain areas of the brain. However, no experiment has been able to show that a change of belief or will is possible by physical stimulation. In other words, a person’s self isn’t fundamentally changed by the poking and prodding of researchers.

Some may ask, how do we account for the way chemical – and even physical – changes impact our thinking? What do we do with the person who experiences severe head trauma and, as a result, has a personality change?

Our physical bodies – including our brains – allow us to interact in this physical world. They’re like an interface.

Think about it this way: we can’t experience the internet without an interface. Before we can exist digitally, we need a computer of some sort and a web browser. But we are not our mouse or our keystrokes or our webpages. We aren’t our online comments or our Facebook statuses. These are means of interacting in a digital world.

So what happens if we get a computer bug? That bug doesn’t change me – but it does affect my ability to live in the digital world. It may make my computer run slower and it may hinder me from running certain programs. Likewise, if my keyboard is broken, I may not be able to type certain letters.

But the person behind the desk is still the same.

We are not merely physical beings. And if we’re not just physical – if there’s a soul or a mind behind the body – then there’s a good chance that when the body dies, the soul continues to live.

One of the best evidences for the reality of life after death is the existence of near death experiences. If a person’s heart isn’t beating, he shouldn’t be able to see what’s going on in the operating room. If a patient’s EEG is flat, she shouldn’t be ‘thinking’ anything. And yet, there are countless examples of this occurring.

As Habermas and Moreland note, “many cases have been gathered in which dying persons were able to view individuals, events, or circumstances around them, or even in other places, with amazing accuracy after coming close to dying or being pronounced clinically dead.” People have accurately reported the conversations that doctors had while in the room. But even more miraculously, many have been able to tell what people were saying and doing in completely different rooms – and sometimes other buildings!

Stories from the Other Side

And then there are the stories about people dying, seeing people they knew, and being revived only to find out that the person they saw had indeed died. Let me give you one example of this (though there are many available). A woman and her two sons were in a horrific car accident. The mother died at the scene and ambulances brought the two comatose boys to different hospitals. One of the boys woke up and peacefully said, “Everything is all right now. Mommy and Peter are already waiting for me.” Soon he lapsed back into his coma and died. This took place without him knowing that either his mother or brother had passed away.

Finally, there have been a number of examples where people have seen things while they were ‘out-of-the-body’ that they couldn’t have known about. One woman saw a shoe on the roof of the hospital where she was being treated. She described it in incredible detail – even down to the color and worn laces – and when someone was sent to check for it, they found it exactly as she’d described.

I know many Christians are wary of experiences but I don’t believe they need to be. We don’t have to assume that everything everyone sees in an NDE is ‘true.’ Satan does, after all, masquerade as an angel of light (2 Corinthians 11:14). But we shouldn’t completely write off NDEs just because every example doesn’t perfectly align.

Near death experiences do powerfully point to the reality that we are not our bodies. There’s more to us than that.

And if there’s more to us, then perhaps that part of us continues to live even after our physical bodies die.

The Resurrection of Jesus

Though body/soul dualism and near death experiences are powerful indicators of a life beyond death, I don’t believe they are the best ones. The best evidence for eternal life is, quite simply, the resurrection of Jesus.

The Resurrection is Historical

The early Christians wrote and believed this at such an early date that the legend-theory could not possibly account for it. People don’t believe legends about those they personally knew.

In fact, no theory adequately accounts for the historical data about Jesus’ death and resurrection. Scholars have argued that Jesus merely passed out on the cross and later came to. They’ve argued that someone stole his body. They’ve even argued that his followers experienced mass hallucinations. But none of these answers are sufficient.

The facts point us to one inescapable conclusion. Jesus rose from the dead. No other explanation comes close to dealing with the evidence.

So What Does the Resurrection Mean?

And if Jesus rose from the dead, then life after death is a reality. Period.

And not only that, if Jesus rose from the dead then everything he said about life after death and resurrection and the way to experience eternal life is vindicated.

And that means that our only hope is in him.

So, what happens after death? Scripture tells us, “And inasmuch as it is appointed for men to die once and after this comes judgment, so Christ also, having been offered once to bear the sins of many, will appear a second time for salvation without reference to sin, to those who eagerly await Him” (Hebrews 9:27-28).

With this in mind, we can wait with hope and expectation – knowing that death is not the end.

And if we’re found in Christ, then death won’t have the final say. Jesus’ resurrection life will give our bodies new life. He will make us like himself.

Are you interested in learning more about the evidence for life beyond death? Check out Gary Habermas and J.P. Moreland’s book, Beyond Death: Exploring the Evidence for Immortality.

I don’t claim to have all of the answers to anyone’s questions about the Christian faith (not even my own). But I’m genuinely looking. If you’d like to look alongside me, I’d invite you to subscribe to my newsletter below. It goes out twice a month – with a focus on deep thinking at the beginning of the month and deep living in the middle.

So, that’s about it for me. Though if you have any questions or comments, don’t be afraid to send me an e-mail or leave a blog comment.

I look forward to getting to know you and to growing with you in grace and knowledge.