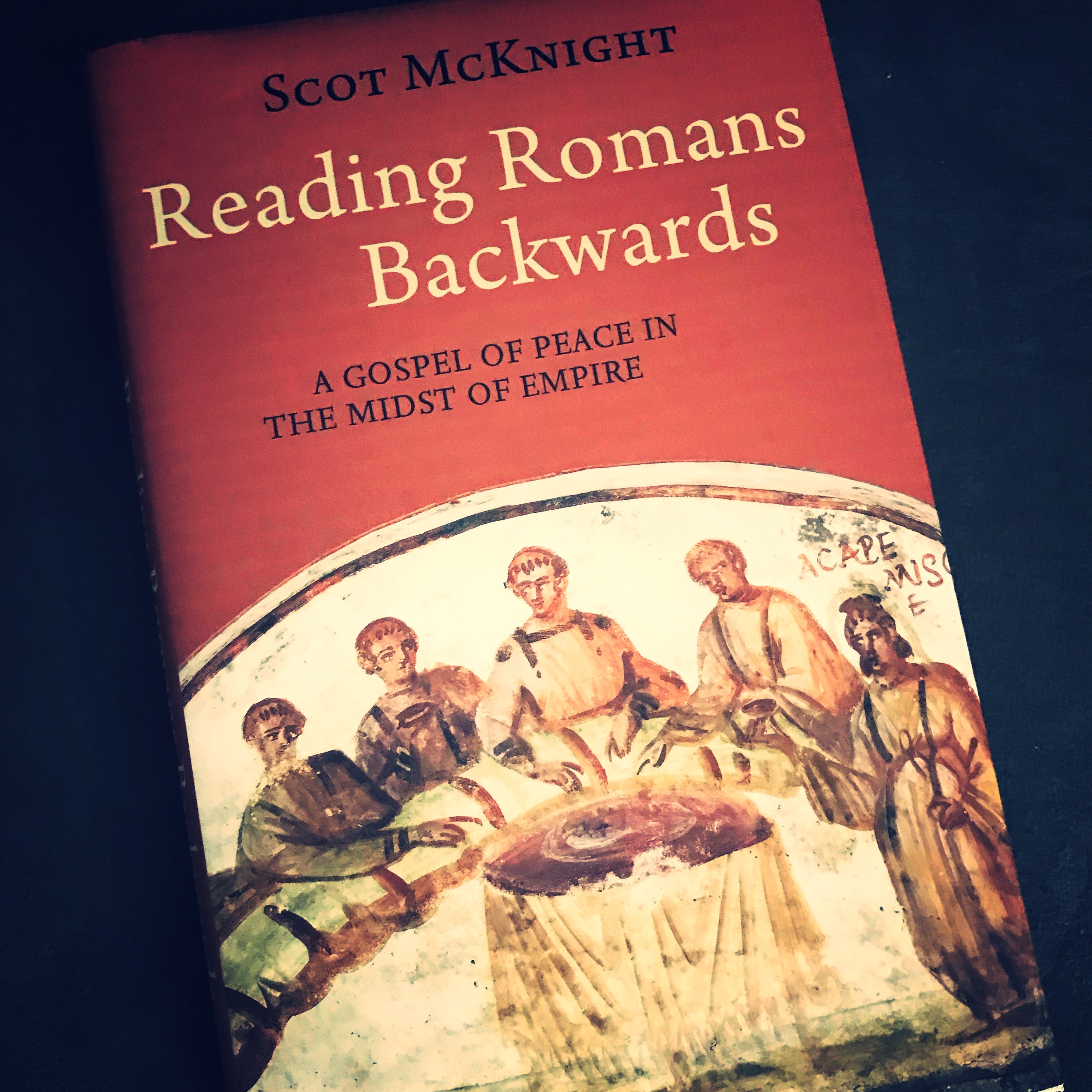 Does the Context of Romans Matter?

Context matters. If I tell my wife, “She’s cute, isn’t she?” and I motion to our six-year old daughter, I’m going to get a completely different reaction than if I say the same thing and motion to an attractive stranger. We don’t speak in a vacuum.

Unfortunately, the church has often acted like Paul’s epistle to the Romans is less a letter to a particular, historic Christian congregation and more like it’s a timeless systematic theology that lays out, step-by-step, Paul’s ordo salutis. But anyone who’s read to the end of Romans ought to realize that this is not a systematic theology.

This is a letter. After all, it has one of the longest closing greetings of any book in the New Testament. Paul mentions nearly thirty recipients by name. These are real Christians in real congregations with real problems. And you want me to believe that Paul was sending them a copy of ‘The Golden Chain: A Theology of Salvation‘ by Paul S. Benjamin? Seriously?

But it’s not just Romans 16 that has made me doubt the theological-treatise-nature of Romans. The structural center of the book, Romans 9-11 has always felt…out of place for a systematic theology. And the constant back-and-forth between Israel and the Gentiles, the Jews and the Greeks… it just felt like there was more to it. Reading Romans like a theology book made me feel like I was missing something important. It felt like I was missing the context.

Seeing the Cultural Context of Romans

All of this led me to think that maybe Romans is less a theological magnum opus and more a piece of pastoral theology. So, when I started preaching through Romans this past spring, I did so with a greater awareness of context. It was clear to me that Paul wrote Romans at a time when the congregations in Rome were struggling to live at peace. The Roman eperor Claudius had expelled the Jews – including Jewish Christians – expelled from Rome. But now, that was over and they were coming back. And it wasn’t going to be an easy reunion. Conflict arose. Churches were split down the middle.

This much was clear to me: Paul was writing this letter to deal with a very real division between Jewish and Gentile believers.

So when I saw that Scot McKnight was releasing a book on Romans, and when I read the title and blurb, I knew I had to pick it up. It was obvious that my thinking was very much in line with what he was advocating for and, I hoped that he might refine my thoughts. Boy did he!

The book is entitled ‘Reading Romans Backwards’ because McKnight believes that when we disregard the ending of Romans, we fail to see its context. But when we begin with the end in mind, we realize that this was a letter to real Christians in real congregations with real problems. And we even meet some of them there.

McKnight mines Romans 16 for every possible gem of information. He describes Phoebe’s role as the carrier and voice of this letter (and I’m sure he’ll drive many complementarians mad with his various references to her throughout the text). Then, he recognizes the fact that Romans was not meant to be read but to be heard – even performed. He marshals a great deal of information about the early Christian congregations in Rome from Scripture, archeology, and other historical sources, so that we have a much more clear picture painted of what “going to church” looked like in the first century.

The Major Players: The ‘Weak’ and the ‘Strong’

Once the scene has been set, the curtain opens and we come face to face with the real stage players: the ‘weak’ and the ‘strong’. Throughout Romans 14 and 15, Paul references the ‘weak’ and the ‘strong’. He describes the weak as those whose consciences are more sensitive to certain areas – particularly to those areas pertaining to the Old Testament law (dietary restrictions, Sabbath, etc.). The strong, on the other hand, are those who don’t feel conviction about those things and who are, instead, tempted to judge and condemn the ‘weak.’

He examines Romans 12-16 in order to give us a better understanding of the ‘strong’ and the ‘weak’ as well as to point out Paul’s practical advice for reaching a united church. McKnight notes that, throughout these chapters, Paul reorients his listeners back to Christ again and again. He encourages the congregations in Rome to “present your bodies a living and holy sacrifice” (Romans 12:1 NASB). McKnight terms this moral and spiritual transformation “Christoformity.” According to him, Paul’s goal in Romans 12-16 is to show the congregations there what conforming to the image of Christ looks like and means in their everyday lives.

Throughout this section, there were a number of passages that fell into place in a way they never had for me before. For example, when Paul deals with the way Christians should address the governing authorities, he isn’t just talking about it for the sake of talking about it. He’s addressing that issue because there were likely members of the ‘weak’ cohort who leaned a little on the zealous side and thought that the best way to deal with Rome was to avoid paying taxes.

McKnight doesn’t posit this out of the ether, either. He ties it to the historic fact that “there were persistent public complaints against the companies farming indirect taxes from the government” (McKnight 46).

And Paul doesn’t just say “Pay your taxes like a good citizen.” He goes a step further, writing, “Render to all what is due them: tax to whom tax is due; custom to whom custom; fear to whom fear; honor to whom honor. Owe nothing to anyone except to love one another; for he who loves his neighbor has fulfilled the law…But put on the Lord Jesus Christ, and make no provision for the flesh in regard to its lusts” (Romans 13:7-8, 14 NASB). And there it is again – Christoformity. “Put on the Lord Jesus Christ.”

After McKnight breathes life into the ‘weak’ and the ‘strong’ by pointing to their shadows in Romans 12-16, he moves on to one of the most challenging sections of the letter – chapters 9-11. Here, the ‘weak’ and the ‘strong’ paradigm make even more sense. Paul reminds the ‘strong’ that they shouldn’t be arrogant – after all, as primarily Gentiles, God grafted them into his people by his grace. And the ‘weak’ shouldn’t think that their lineage or Torah-observance makes them God’s people. Only Christ can do that. Again, there’s that idea of Christoformity.

As you’d probably expect from McKnight, he doesn’t believe that Romans 9 has anything to do with individual election to heaven or hell. As he puts it, “Romans 9-11 is not about who gets saved in the deeply personal sense but about who the gospel agents are in God’s redemptive plans.” When you read the text with the ‘weak’ and ‘strong’ in mind, it makes this whole portion of the text come alive in a striking way.

Beginning Romans with the End in Mind

After looking at Romans 9-11, McKnight turns to the beginning of the letter. He addresses Romans 1-4 with a section entitled, ‘A Torah that Disrupts Peace’. He argues that Paul gears these chapters toward the ‘weak’, those Torah-observant Jewish Christians who may judge the non-Torah-observant Gentile Christians and who may have a tinge of pride concerning their Jewish heritage.

I found most of the content in this part of the book to be excellent, though less revolutionary than the first half of the book. Basically, McKnight argues that the first four chapters of Romans are geared toward helping the ‘weak’ see that God has indeed accepted the Gentiles – and that this acceptance does not nullify his promises to Abraham, the goodness of the Torah, etc. Paul wants everyone to know that God has always saved and incorporated his people based on faith.

Christoformity: The Goal of All Creation

The final section of ‘Reading Romans Backwards’ deals with Romans 5-8 (And what a way to end, am I right?). McKnight writes, “We discover in Romans 5-8 a sketch from Adam to the glorious kingdom, from creation to consummation, from sin and Sin and Flesh and Death to salvation, redemption, rescue, and both present and future transformation of both humans and all creation” (McKnight 143).

This section offers insights on a number of peculiar, oft-debated passages and ideas – including the idea of Sin as a force that goes beyond individual acts of disobedience and the nature of the struggle portrayed in Romans 7. According to McKnight, all of this talk about transformation and new life points us to one big idea: Christoformity.

Christoformity was the answer to division within the congregations at Rome. If the ‘strong’ and the ‘weak’ could both learn to see the world through the eyes of Jesus… Or if they could learn to have his mind… If they could just put on his sandals… Or if they could allow the Holy Spirit a little bit of room to work, then they might really get along. They might experience that supernatural peace and unity that Jesus promised his people.

And, perhaps more importantly, when we understand that Paul wrote this letter to help a divided church get along, it hits home with a little more force. After all, we face a divided church. A church that’s chopped up along lines of race, ethnicity, language, socio-economic status, political orientation, denomination, and more.

And if the answer to all of the first-century church’s divisions was a greater conformity to Christ, maybe that’s our answer too. Now, if someone would just write a book on applying these ideas to pastoral ministry…

You can pick up your copy of ‘Reading Romans Backwards’ by clicking here.